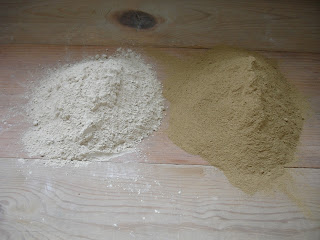 I work with two kinds of clays, a brick clay from Georgia and a very impure kalin from Montana.

The Montana clay is called Helmar (on the right of the picture above) and is from a very small mine near the Archie Bray Foundation.
I like its properties because it`s not a very clean kalin; it has a beautiful yellow tinge to it, so it makes a terrific slip because that warmth comes through.
I like that quality compared to a refined English porcelain or grolleg which it is so white. Now, there`s an elegance to grolleg but there is something gutsy to the kalin from Montana.

The other clay I`m using from Georgia is Lizella (on the left of the picture). I used to use Ocmulgee, which is a neighbor from the same area. Now the Lizella is not nearly as nice as the Ocmulgee, but it`s got some guts to it; it`s a tough clay to use, it kind of sucks up water, and it can be kind of mealy but it fires up beautifully in the wood kiln. I add kalin and fire clay to it to open it up and so it can go to higher temperatures.

The clays come in 50 pound bags. I blend them in a dough mixer, and then I typically make a 1500 pound pile and I let it age. I mix it wet and let it sit for 8 months, after that its really quite nice, although a year is better.